Some Post-Tales Reflections on The American Bartender of The Year

July 27, 2010
+
My last day in New Orleans was Sunday, July 25th. That day at noon, being a few hours away from my flight departure, an hour past having checked out of my hotel after getting one hour of sleep, and 6 hours after having gotten caught in the mighty aqua force of Tropical Storm Bonnie on Iberville Street, I was interviewed by Tim McNally on AM 690 WIST New Orleans. Barely moments into the interview, and before I'd really even gotten my bearings, Tim asked me what got me into this whole cocktail field.

Oddly enough, I had no prepared answer for this. I'd never really thought about it. It just kind of seemed to happen. But faced with the embarrassment of making my live radio debut by saying, "uhmmmmm," I quickly reached into the proper spot of my subconscious and fetched the real answer. The real answer was, quite simply, Murray Stenson.

This past Saturday night, Murray was named Bartender Of The Year at the Spirited Awards at Tales Of The Cocktail. At the time, I was sitting in The Bourbon House having dinner, when a text I had requested from Jon Santer came in simply saying, "Murray won."

I love the cocktail industry. It is brimming with creativity and with beautiful and amazing people. The affection people have for what they do, and for the others that do it, is unmatched in any other community on earth I have ever encountered. But...too often the tireless self-promoters are the ones who gain notoriety, while the truly talented people are overlooked. Bartenders complain justifiably that this happens at the hands of the media and the spirit companies with their deep pockets. But even bartenders are not immune to it, often recognizing and seeking out their own peers who focus on making a name for themselves, while other more talented smiths of the craft focus on honing their skills, improving their bars, building the foundations of their community, pleasing their customers.

If ever in this industry there was a person who was emblematic of the humble devotees to the craft of bartending and the art of hospitality, forsaking the grand-standing and career building, it is Murray. It was only fitting that Murray was not there Saturday night to accept his award. He never seeks out the limelight, and would have been embarrassed, even encumbered, by all the attention. He would have had to schmooze it up with the throngs of new adorers, made appearances at the ensuing functions, and stayed up past his bedtime. All things I dare say Murray prefers to avoid.

All this is what makes it so special that Murray won. Hard work, dedication, and passion won. Bartending is hard work folks. I've done it a few times. It takes it out of you. Try doing it about eight thousand times. Now try doing it eight thousand times at such a level of intensity that you always inspire, and frequently straight up blow minds.

I wish the whole world could have been a pack of flies on the wall this past April, when at the unofficial wrap-up party for the Seattle BarSmarts program at Zig Zag, many of the world's finest bartenders sat at Murray's bar with jaws dropped and, in a few cases, tears in eyes, witnessing the Murray show. It wasn't about drink making technique. It wasn't about displays of cutting edge trends in mixology. It wasn't even really about the drinks. It was about an absolute master of his craft displaying an undying passion for what he does, an impossible level of speed and efficiency, and a keen awareness of every single person at his bar (and there were a LOT of them that night) that superseded even their awareness of themselves.

I've gone on long enough. I'd love to share anecdotes about amazing Murray feats, but I don't want to write a book here. Feel free to leave your own comments with your own Murray tales. Suffice to say, the judging panel of the Spirited Awards should be very proud of themselves. They got it all perfectly right. 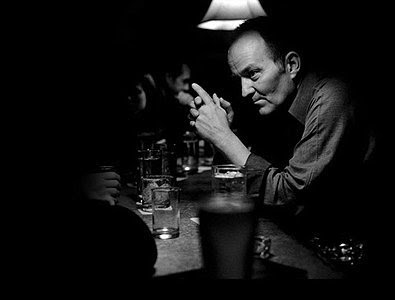 Chas. Munat said…
Credit where credit is due: the wonderful, almost iconic, photo of Murray is by one of Seattle's most interesting bartenders -- long retired but still seen in public occasionally (buy him a drink!) -- and now photographer, Dan Crawford.

Until recently, Dan lived in Belltown and was seen regularly at Zig Zag, Rob Roy, Bathtub Gin, and other bars in the area. But some sort of nasty housing swindle forced Dan to relocate, and no one has seen him since.

Dan! Where are you? Drop us a line!

dave waddell said…
As a comparative neophyte to the cocktail world, I consider myself ridiculously spoiled to have learned about cocktails from Murray Stenson with the admirable (and indispensible)help of one of Seattle's besy cocktailers, Autumn Waddell.

As much as I think it's wonderful that Murray won, and completely validated, it's turned Zig Zag into a hectic zoo, which has impacted my favorite thing about it; the combination of amazing drinks, scintillating service and interesting regulars in an intimate setting.
October 18, 2010 at 8:46 PM

T. Mixeur said…
I agree Dave. It's a double-edged sword. I think at this point the only way to grab a quiet moment or two at Zig Zag is to go after 1am on a weekday, which isn't very feasible for me. Here's hoping Murray takes a side gig at some out-of-the-way spot, wears a fake mustache, and calls himself Maury Jensen. I'd love to sit at Maury's bar.
October 19, 2010 at 10:52 AM

Anonymous said…
I don't know if anyone will read this, but I just met the photographer, Dan Crawford. He's living in in Queen Anne and tonight he was at Solo. We traded numbers and I look forward to hearing the stories from my new friend
October 12, 2012 at 2:24 AM

T. Mixeur said…
That's great! Tell Dan I said hi, and be sure to do what you can to promote his work. He's a brilliant photographer with an endless well of stories.
October 12, 2012 at 9:08 PM 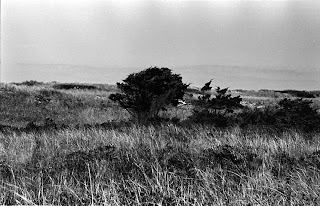 The Assignment from Le Kaiser Penguin : A drink with a minimum of three ozzes of high proof spirit - preferably one with some aesthetic value and agreeable flavors. While it runs contrary to the philosophy of Le Mixeur to skim by with the bare minimum, we nonetheless present a concoction bearing high proof spirits of exactly three ozzes (only true contrarieties dare to be contrary to even themselves). And as such, it runs consistent with Le Mixeur to steadfastly remain enigmatic and obstreperous, and thus we present a concoction containing constituents of a specific and homemade nature (and despite being contrarieties we will grudgingly accept this consistency for the sake of mixology). And it is without suitable explanation that Le Mixeur presents some verse as a humble offering (except to say these turns of phrase have contributed, along with the three ozzes of high proof spirit, to Le Mixeur's blessed state of this moment): animals "have you forgotten what we were like the 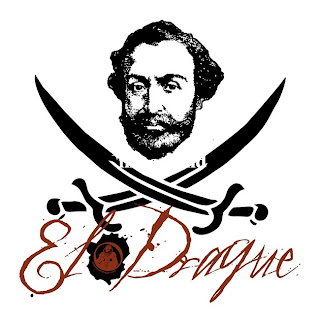 Le Mixeur Sharky SF: A Shark Drink From The Cove!

Le Mixeur Sharky San Francisco kicks off in a few hours. For all of you who are sitting by your computers waiting for updates, here's another drink for the evening. This one comes from Smuggler's Cove proprietor Martin Cate: Le Dra-kay Shar-kay Fresh mint, fresh lime, demerara sugar, and barrel aged Novo Fogo cachaca for a refreshing twist on a mojito, served on the stem. This drink is usually known as the El Draque, and is one of Smuggler's staples. For tonight, hoist a few in honor of Sharky and for the benefit of Special Place Foundation . Then move on to some of these other bars... The 5th Floor  - 12 4th St. (inside Hotel Palomar) lounge open 5pm to midnight Heaven's Dog   - 1148 Mission St. (at 7th), open 5pm to 11pm. Hog & Rocks  - 3431 19th St (at  Mission), open 5pm to midnight. Jasper's Corner Tap & Kitchen  - 401 Taylor (at O'Farrell), open 11:30am to midnight The New Easy  - 3255 Lakeshore Drive, Oakland, open 4:30pm to 2am.

With Seattle, Boston, New York City, and Portland in the books, Le Mixeur Sharky  raised over $10,000 for children with Autism in its first five weeks of existence. After a brief respite, we tackle the 800 pound gorilla of Left Coast cocktail cities, San Francisco. This time, Le Mixeur Sharky will feature a different format. Namely, instead of one site, we're going to have simultaneous events happening at several. On the night of June 19th, from open until close, the following bars will be offering special selections of original cocktails, with all proceeds being donated to the cause: Heaven's Dog   - 1148 Mission St. (at 7th), open 5pm to 11pm. Hog & Rocks  - 3431 19th St (at  Mission), open 5pm to midnight. Jasper's Corner Tap & Kitchen - 401 Taylor (at O'Farrell), open 11:30am to midnight The New Easy  - 3255 Lakeshore Drive, Oakland, open 4:30pm to 2am. Smuggler's Cove  - 650 Gough St. (at McCallister) open 5pm to "close." Wo Hing Ge